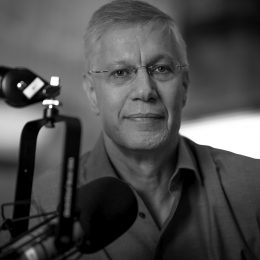 Chairman of the Board
Ayn Rand Institute

Yaron Brook is chairman of the board of the Ayn Rand Institute. He wears many hats at the institute and travels extensively as ARI’s spokesman.

Brook can be heard on The Yaron Brook Show, which airs live on YouTube and Spreaker. He is also a frequent guest on national radio and television programs.

In addition to podcasting and speaking globally, Dr. Brook authors works that inspire critical thinking. His most recent book, “In Pursuit of Wealth: The Moral Case for Finance,” makes the case that few industries are more vital to our prosperity – and more maligned – than the financial industry. Brook and coauthor Don Watkins explain why finance has faced so much criticism, and why, despite the conventional image of financiers as “greedy” and reckless, finance is a moral industry. Brook and Watkins also authored national best seller “Free Market Revolution: How Ayn Rand’s Ideas Can End Big Government” and “Equal Is Unfair: America’s Misguided Fight Against Income Inequality.”

Above and beyond his best-selling books, Dr. Brook is a contributing author to “Neoconservatism: An Obituary for an Idea,” “Winning the Unwinnable War: America’s Self-Crippled Response to Islamic Totalitarianism,” and “Big Tent: The Story of the Conservative Revolution — As Told by the Thinkers and Doers Who Made It Happen”.

Brook was also a columnist at Forbes.com, and his articles have been featured in The Wall Street Journal, USA Today, Investor’s Business Daily and many other publications.

Brook was born and raised in Israel. He served as a first sergeant in Israeli military intelligence and earned a BSc in civil engineering from Technion-Israel Institute of Technology in Haifa, Israel. In 1987 he moved to the United States where he received his MBA and PhD in finance from the University of Texas at Austin; he became an American citizen in 2003. For seven years he was an award-winning finance professor at Santa Clara University, and in 1998 he cofounded BH Equity Research, a private equity and hedge fund manager, of which he is managing founder and director.

Brook serves on the boards of the Ayn Rand Institute and on the board of the Clemson Institute for the Study of Capitalism. He is a member of the Association of Private Enterprise Education and the Mont Pelerin Society.

“The Morality of Moneylending: A Short History” in The Objective Standard Fall 2007

“The Resurgence of Big Government” Fall 2008

Road to a Free Society: ARI on Tour: “Free Speech and the Battle for Western Culture‬” January 21, 2015

Debate with Dr. James Galbraith of University of Texas at Austin’s Inequality Project: “Inequality: Should We Care?‬” April 2014

“The Emergence of Libertarianism” in Big Tent: The Story of the Conservative Revolution — As Told by the Thinkers and Doers Who Made It Happen April 2014

“The ‘Forward Strategy’ for Failure” (with Elan Journo) in Winning the Unwinnable War: America’s Self-Crippled Response to Islamic Totalitarianism September 2009

“The Financial Crisis: What Happened and Why”

“The Morality of War”

“The Rise of Totalitarian Islam”

“Why Bad Economics Won’t Go Away”

“How Ayn Rand’s Ideas Can Save Health Care”

“The Immorality of Government Medicine”

Yaron Brook on Ezra Levant’s show The Source: “The Morality of Capitalism”

UFM New Media Interview: “Altruism or Egoism: Which Moral Code Should We Adopt?”

“Why Are We Moving Toward Socialized Medicine” July 29, 2009